Tioman Island (Pulau Tioman) lies on the south eastern coast of Malaysia in the South China Sea. It seemed like an island paradise that necessitated a visit. White sand beaches, turquoise water, great snorkelling and tranquility.

But how to get there? We were in Kuala Lumpur. Bus and ferry. Simple. We’ve got this. Here’s how it went.

#1 The TBS bus station in Kuala Lumpur is a good 20 minutes out of the city centre. It took 20 minutes on an early Saturday morning. At other times of the day, count on it taking much longer.  Make sure your cab driver uses the meter. We forgot to strike that deal and were way overcharged.

#2 DO NOT take this bus line from Kuala Lumpur -Transnasional. It was easy to book our tickets online with them. We had our confirmation code. We felt so prepared.

We were bright and early for the bus at TBS bus station in Kuala Lumpar. It was a 9 am bus which gave us plenty of time to catch the 5 pm ferry to Pulau Tioman. When the bus didn’t show up until 11:20, we were beginning to think we might need a backup plan.

All the buses and shuttles in SE Asia, that I have experienced go at an incredible speed, kind of like a rocket. This old bus bumped and rattled along and eventually started smelling like burning rubber. We called out to the driver that the bus was filling with smoke and he pulled over. We all quickly exited the bus. 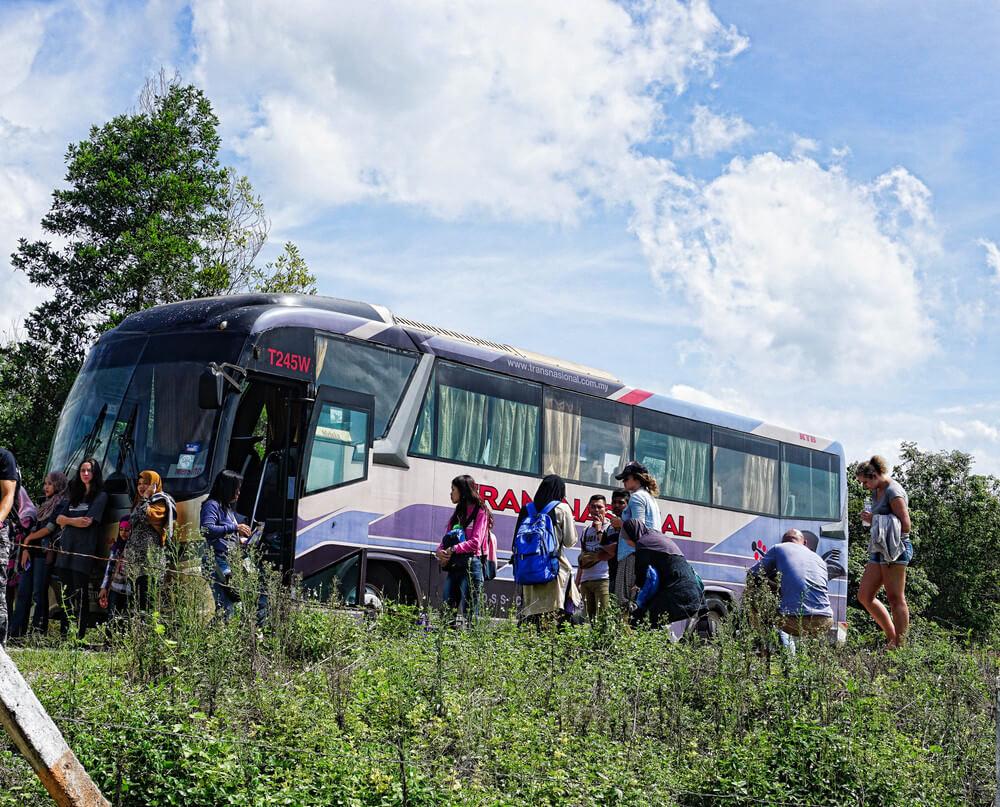 We stood around in the scorching heat as the driver doused the overheated engine with a little water. Shortly after, we got back on the bus. Should we have? A few minutes earlier there had been smoke inside. As the bus jerked into action, it was evident the bus was struggling to get out of first gear and second.

We trundled along and took a snack break around 4 pm. Definitely no ferry today.

This was becoming an endless journey. At about the 8 hour mark, we pulled over to let a local person off and the bus decided not to start again. The locals all started trickling off. Motorbikes started appearing to whisk them away. The bus driver looked at us and said, “Finished. That’s all.” and called for taxis.

Four of us decided to share a cab into Mersing (the ferry town). Our driver was so kind and for no extra charge took us to the ferry ticket office at the Bluewater Hotel, which luckily was still open.  We were so relieved to get tickets as there were rumours flying around that the boats would be full. It was the start of school holidays in Malaysia and Singapore, and therefore a busy time to be travelling. Our friends had pre-purchased their tickets online for the 5 pm ferry and lost their money.

What should have been a 6 hour journey was an 11 hour marathon, including the wait at the bus station.

As I said, don’t take Transnational. The cab drivers and others all shook their heads, “Problems everyday with those buses.”

On the return trip we took Sepakat Liner. It was a smooth six hour trip back to Kuala Lumpar. 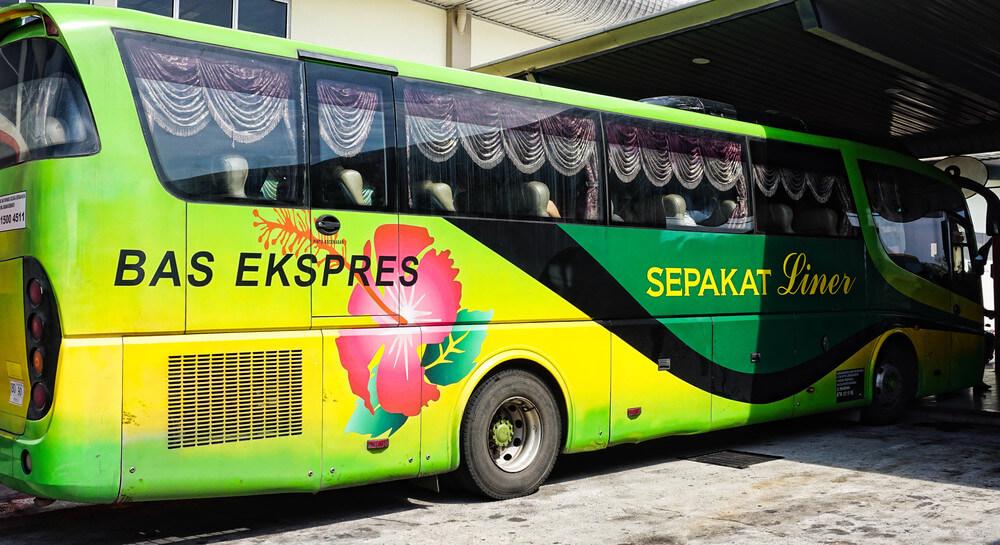 #3 Arrive good and early at the ferry terminal which is an easy walk from Mersing. We were told to arrive at least 90 minutes prior to our departure time which seemed ridiculous. Do it. Go early. There are literally a million lineups. Well, almost a million.

Although we had already purchased our tickets, we were told to go to Gate 8 where the lady ripped off the edge of the ticket and told us to line up for registration. The counter was not yet open but the lineup was long. We lined up immediately. When the counter opened, they scanned our passports, ripped our tickets and wrote something on them.

Next you have to line up to pay the conservation fees. There are two separate lineups. One to pay the National Park fee and one to pay the Marine Park fee.

When you have done all that, line up again to get on the boat. Show your ticket and that you have paid the conservation fees and in return you get a boarding pass (a laminated piece of paper).

It is not difficult to do any of this but it would be stressful if you were in a rush or didn’t know about all the different lineups. There were some very angry customers who clearly didn’t know that there was more to the process than purchasing a ticket. 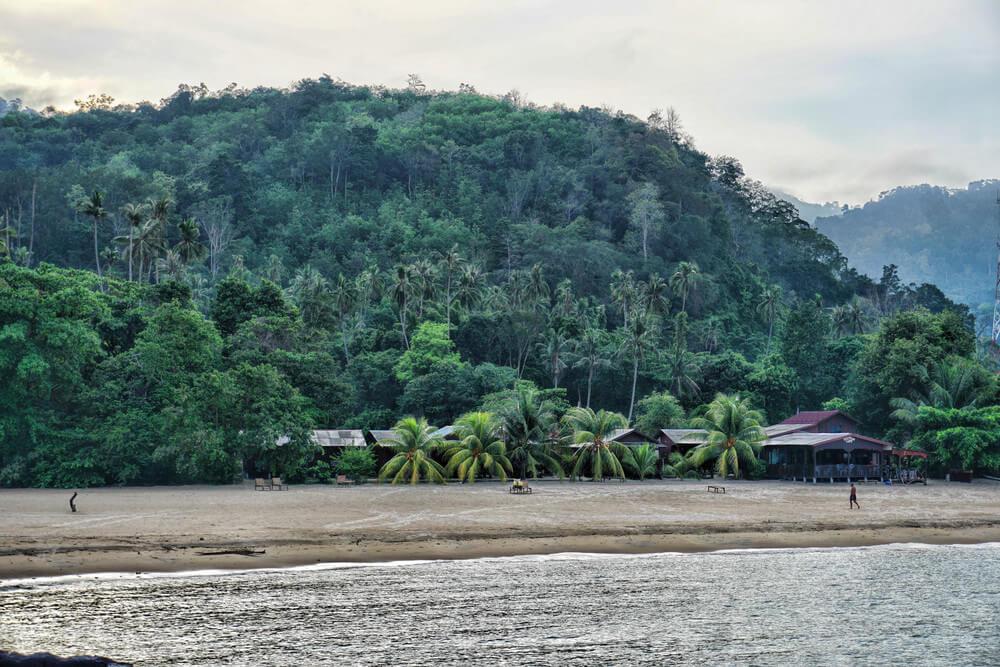 Bluewater Express is the sole ferry company that runs to Pulau Tioman. It is about an hour and a half to two hours to cross to the island. Our ferry to Pulau Tioman was on time.

On our return trip when we got close to the pier at Mersing, many of the passengers had to stand in the bow of the boat to shift the weight (presumably) as we inched over the sandbar. This was a first for me on a ferry.

#4 Know which stop you are getting off at. The ferry has a number of stops and does not always land at them in the same order. In other words, the first stop is not always the first stop. Pay attention when they call out the landing.

#5 We got off at Tekek which was a busy little place with a Duty Free shop, street food and lots of people of milling about. We had chosen to stay at Juara Beach on the far side of the island so hopped in a 4X4, and headed off away from the crowds.

#6 Plan an openended stay, if possible. We did not realize, that with the ferry and bus schedules the trip to get there and back took much longer than anticipated. We had to leave a day earlier than we wanted as we needed to allow enough travel time to catch our flights to Borneo. (I know, woe is me!) And with the creaky old bus, we got there a day later than planned!

#7 GO! It is beautiful and relaxing. It is like stepping into another world. An unhurried one where time just melts away. We met people who had planned to go for a few days and were still there a few weeks later. 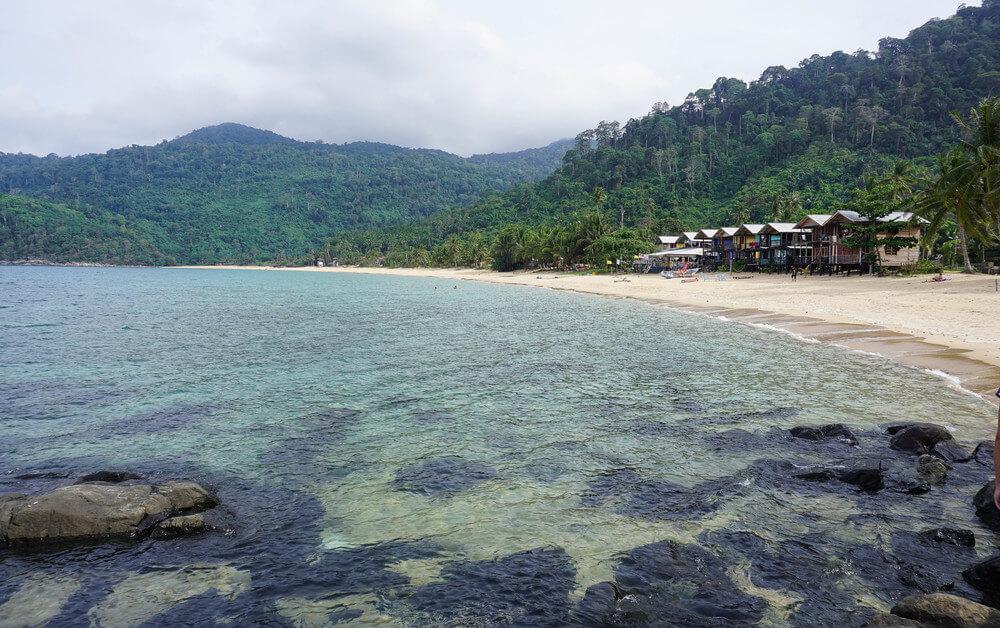 There is a 25 MYR ($8.00 Canadian) charge per person to get from the ferry landing to Jaura beach. It is more expensive if you are solo. Bushman picks you up.

Bushman –  The meals served at their restaurant were simple, absolutely delicious and inexpensive. Bushman himself does a lot of the cooking.

Where to See Orangutans in Borneo