Los Guatuzos: A Wildlife Refuge in Nicaragua is the place to go if you are restless in the city of Granada and realize you are missing the jungle. Plan a trek to the Nicaraguan jungle, you’ll be amazed. It will leave a lasting impression. One that becomes a highlight of the entire trip. Travel by bus for seven hours and by boat for four and there you’ll be in a remote, lush corner of Nicaragua. Los Guatuzos – what makes you so special?

It was a 7-hour chicken bus ride from Granada to San Carlos, then a 4 and a half-hour boat ride across Lake Nicaragua and up the Rio Papaturro to reach Los Guatuzos. Trying to buy a ticket and find out an exact departure time was tricky but we finally met some rugged-looking captains onshore and bought our tickets. An hour later, the captain gave Emily and I a quick nod as if to say, “Time to board.” 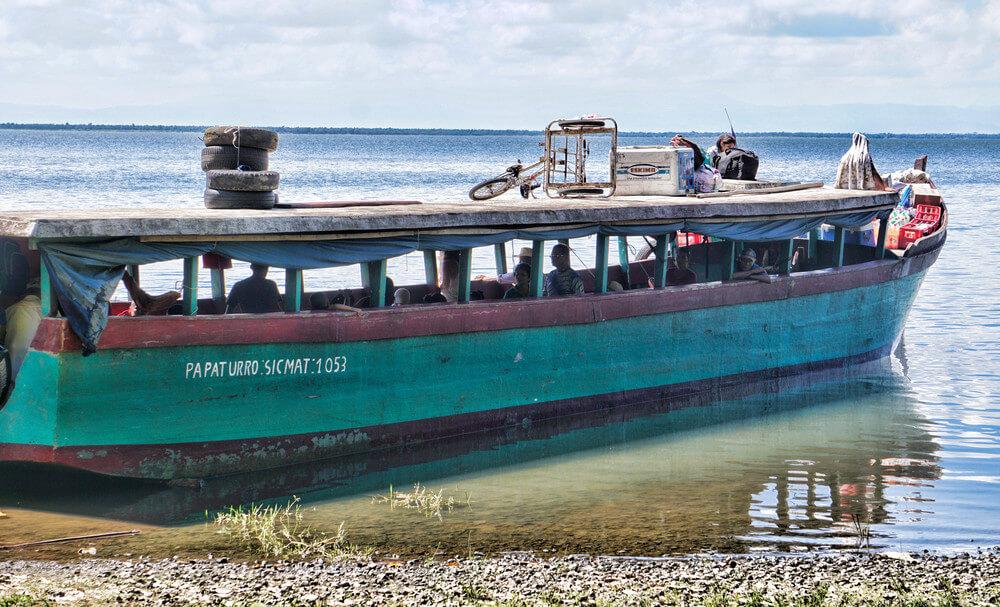 As I clambered down the steps from the dock and then down again into the boat, I had to duck in order for me and my backpack to enter the boat. As I ducked down, I glanced up and saw 80 Nicaraguan faces staring at me. I don’t know what I was expecting but I was shocked. I hadn’t really seen anyone board the boat. I dropped my pack on top of a pile of cargo and started to find a seat.

But the seats were benches that stretched straight across from starboard to port. And they were filled with Nicaraguans sitting shoulder to shoulder. “OK Em. Here we go.” I whispered over my shoulder. I started to make my way  through people saying, “Lo siento.” (sorry). Sure enough about 4 benches back people squashed over and made room for us.

I loved being an observer and also a novelty. The Nicaraguans, some in their Panama hats, were clearly amused as Emily and I played our card games. I loved how the hammocks were strung and babies and grandmothers were swung to sleep. And how, as is so common in Central America, food is sold while travelling. We happily partook in an ice-cream.

After about an hour, the boat backed into a sandy beach and everyone hurried off. Waiting was a lunch barbecue of grilled fish, plantain and rice. On our return trip, it was different. Emily got my full attention when she elbowed me and whispered, “Pirates, Mom!” Sure enough, a boat was pulling up alongside ours as our motor shut off. This was Nicaraguan food delivery at its finest. Everyone lined up for grilled fish wrapped in a banana leaf.

As the boat made its way up the very shallow Rio Papaturro, men used sticks to push us offshore as we rounded corners. Meanwhile, egrets and herons flew overhead and iguanas lazed in the trees. 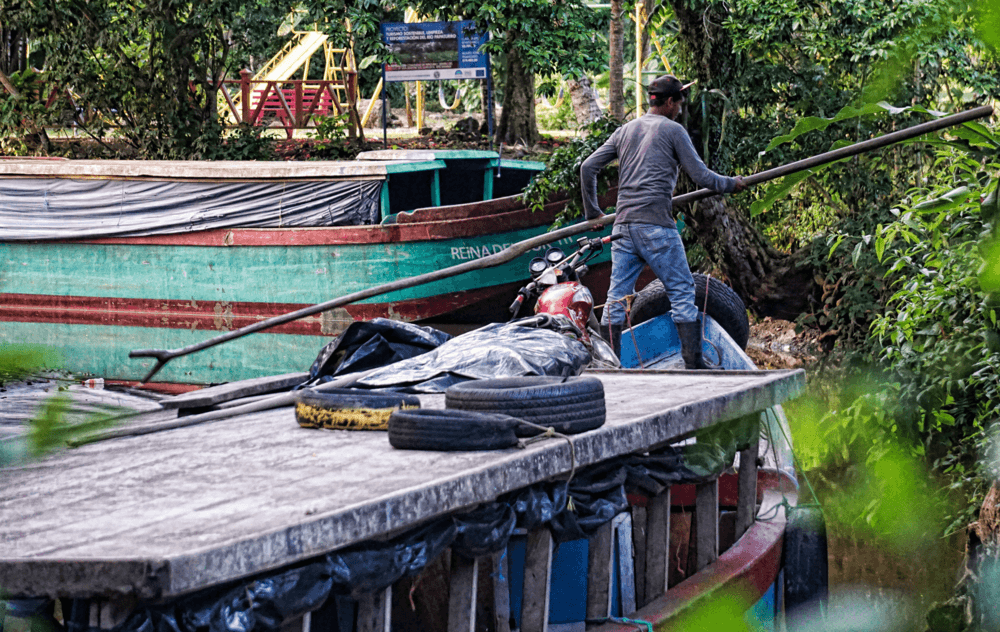 Along with Georg from Germany, we were the only non-Nicaraguans travelling. I felt so adventurous and connected to humanity. We are all people just living our lives.

Jungle sounds –  monkeys swinging from limb to limb, exotic birds eating papaya, frogs, cicadas – and silence marked with the flashing of fireflies. A rustic cabin by the river. No wifi. Just what we ordered. Truly this place,  Los Guatuzos, a wildlife refuge in Nicaragua is also a personal refuge to rejuvenate.

Armando and Aileen were the perfect hosts. Armando emanates a twinkle when it comes to wildlife. He got so excited showing us different birds and mammals This, along with his commanding knowledge of the jungle, made him the perfect guide. The fact that he only really speaks Spanish added spice to the whole adventure. Aileen’s warmth, great pride in Nicaragua and determination to have conversations in a mix of beginner Spanish and English were an integral part of the experience.

Did I say wildlife? On our doorstep?

The papayas were ripe on the tree and there was a constant lineup of birds waiting for this tasty treat. Colourful Aracaris and woodpeckers took their turn.

Monkeys. They just captivate me. Is it because they are just so human-like? I know…when was the last time I munched on a seed pod? It was just Em, me, the monkeys and the hush of the jungle.

Love the rainforest? Here’s another way to experience it in Nicaragua. Read about Base Camp Bartola.

Armando jumped in his boat and we followed suit. Immediately, it became apparent that this man has an eagle eye. There was darkness and silence as we buzzed quietly down the river with Armando shining his light to show us nighttime wonders. We saw many birds sleeping on branches, caimans silently resting on shore, green basilisk lizards, turtles and iguanas. And the pièce de resistance was trekking after Armando in the dark to find the hooting mottled owls.

We arrived in Lake Nicaragua and silently floated under a blanket of sparkling stars. Silence. Just the water lapping against the hull of the boat. And silence.

It isn’t very often in our world that we discover silence, stop and soak it in.

Three tourists and three guides. Four hours. Trekking down the road and following Armando into the bush. We found trees that are over 500 years old or whose bark smells like cinnamon, leaves that smell like cloves, achiote, a cacao plantation.  We saw sloths, hummingbirds, howler and spider monkeys, and a tayra (weasel) and loads of gorgeous birds – from oropendolas and motmots to tanagers and aracaris.

As we traipsed in the jungle after Armando – he produced a jungle swing for us.  A final delight on a hot, humid trek.

The Eco Lodge across the way appeared rather abandoned and run down. That didn’t stop Georg, Emily and I from exploring early one morning. We clambered gingerly up the ladders and found ourselves eye to eye with monkeys. Have you ever heard a monkey pee in the jungle?

Lidia was our cook, creating simple and delicious meals. There is no school in January in Nicaragua, so we were thrilled to hang out with Lidia’s daughters. A little fishing and bike riding to find monkeys, all led by a five-year-old!

Cheers to you Los Guatuzos. You secured a lasting place in my heart. That jungle. Those trees with their majestic, ancient spirits soaring above us.  The wildlife. Those personal connections. The laid-back lifestyle. It was a feast for the senses.

For me, Los Guatuzos, you were pure magic.

It is with regret that I add this disclaimer to advise you that there is political instability in Nicaragua currently. Please refer to your country of origin advice before travelling. Click here for Canadian information.

Tips to get to Los Guatuzos: A Wildlife Refuge in Nicaragua

Bus: We took a public bus from the waterfront in Granada to San Carlos. Go to the bathroom before you leave. There were no bathroom breaks.

Boat: Take the boat from Granada across Lake Nicaragua. Water levels were really low this year so the boat was cancelled.

Plane:  You can fly to San Carlos from Managua or Ometepe

There really isn’t a ticket booth.  Just keep asking people along the shore where the boats are and you will eventually find someone to buy a ticket from

Armando can pick you up in San Carlos and take you in his boat up the river.

Taking the public boat was much cheaper and an experience in itself.

We ate all our meals at Cabañas Caimán. There is a restaurant across the bridge but when we stopped by there was not much available.

Lidia and Aileen prepared the meals. They were delicious and simple and took into account food allergies as I don’t eat gluten.

Nicaragua: Travel to the Rainforest

The Magic of Turtle Season in Costa Rica